The Grayson Fire Department recommends that you install at least one smoke alarm on every level of your home, including the basement. Even better is one in every bedroom. Smoke alarms are designed to wake you up if a fire starts while you are sleeping. Be sure your smoke alarms are near bedrooms and other sleeping areas in your home.

When was the last time you heard your smoke alarm? Battery-operated alarms should be tested once a month to make certain they are working.

Replace the batteries in your smoke alarm twice a year. The Grayson Fire Department recommends you do this when we change our clocks for Daylight Savings Time each Spring and Fall. Install a new battery immediately if an alarm “chirps” to indicate a low battery.

Note: A ten-year lithium battery smoke alarm does not need to have its battery changed. Replace smoke alarms that use extended-life, lithium batteries when the alarm “chirps” or fails to respond to periodic testing. The batteries in these units cannot be replaced.

Use the hush button to silence a false alarm. Never disconnect or remove the battery. If your smoke alarm does not have a hush button use a magazine or kitchen towel to wave fresh air into the detection unit

Replace your smoke alarm every ten years. After ten years, your smoke detector will have been working consecutively for 87,000 hours. No other appliance in your home works this long. If you do not know how old your smoke alarm is, or if it is ten years or older, replace it as soon as possible. 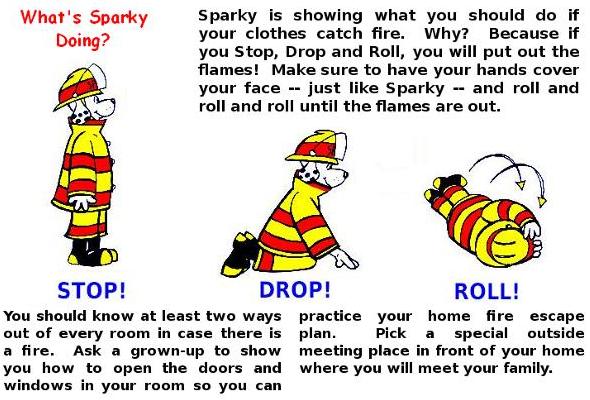 CLICK HERE to print out a Home Fire Safety Checklist to see if there is anything in your home that may put you at a higher risk for a fire.

Would you like to have more information or to have the Grayson Fire Department come to your classroom or school for Fire Prevention Week? All you need to do is just email us with your contact information, the day that would be the most convenient for you and number of students. We bring a packet for each student and information on fire safety for the parents as well. Each year the number of students we have educated during this week has increased. During previous Fire Prevention weeks we have educated as many as 800 students each year. Also, we have seen a reduction in structure fires in the past few years. We would like to think that this due to increased public education for home fire safety.